Landmarks in the Wondermondo site have a rating from 0 (least wondrous) to 100 (most wondrous). This rating is calculated with a special formula, using the data of four criteria. These criteria are:

Further below are listed the 10 very best wonders after a thorough analysis of more than 11 500 wonders of Earth!

Kaaba in Makkah (Saudi Arabia) has the highest rating on Earth in the criteria “Story” – 96%. The total weighted rating though is 74.7 (22nd place) because this wonder leaves a lower visual impression if compared to many other wonders around the world.

10 top wonders of the world

One of the most unusual and most beautiful cities on Earth, containing an unbelievable amount of art and architecture values. Venice has been built on 117 small, closely located islands and has been the capital of a powerful state in the 7th – 18th century. The largest series of fortification in the world with a total length 8,852 km, including 6,259.6 km of the actual wall. Constructed in the 5th century BC – 16th century AD by Chinese to protect northern borders of the Chinese Empire against intrusions by northern nomads. The oldest fraction is the Great Wall of Qi (in Shandong) – an approximately 600 km long section of wall built 685 BC.

One of the most spectacular archaeological sites in the world, an Inca town. Machu Picchu is located on a rugged cliff peak and consists of extensive ruins of stone structures. It is believed that the town was built around 1450 as a shelter and center for Inca rulers – and abandoned sometimes around 1572. The ancient capital city of Nabateans was established around the 6th century BC in the site of ancient sanctuary. Contains some of the most beautiful and intricate rock-cut architecture in the world, available after walking through some 1.2 km long, narrow gorge.

Possibly the most impressive canyon in the world. This 446 km long canyon is up to 1,800 m deep and has with rugged, nearly vertical walls. 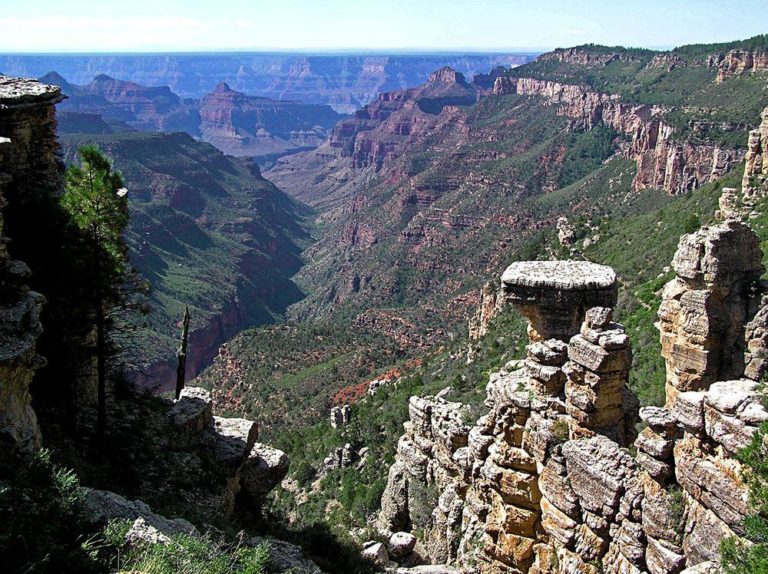 World’s largest curtain of falling water, 1,708 meters wide and 108 meters high waterfall. One of the most impressive natural sights in the world. One of the most enormous and most impressive waterfalls in the world. This waterfall is “only” 82 meters tall, but 2,700 meters wide. Currently, the wonders of the world in Wondermondo are divided into 124 categories and four main realms: geology, biology, archaeology, and architecture.

What is a wonder?

Many wonders are linked to a certain place. The aim of Wondermondo is to list and describe such places all around our planet. Thus, the name "wonder" on this website means a surprising place on our planet.

Wondermondo informs you about the most unusual and interesting wonders of the world. This is a unique website because facts and science matter here but at the same time stories are told in a simple, accessible way.