This category includes fortified buildings – houses of influential and rich people. This seemingly simple definition though does not set strict limits and in a lot of cases, it is not entirely clear whether a building is a castle or not. Especially complicated is to set a border between castles and palaces and also between castles and fortresses.

Characteristic features of castles are:

The construction history of castles knows hundreds of witty inventions to protect the inhabitants of the castle, such as murder-holes where the boiling pitch was poured on intruders, drawbridges, portcullis, and many others.

Castles around the world

Castles were developed in every part of the world where people have a settled life and powerful individuals among them. If a man had more than everyone else around him, he had to protect his possessions and himself. Thus, step by step such people developed dwellings that were not available to uninvited guests.

The diversity of castles around the world is huge. In Europe are many thousands of castles – medieval structures where lived governors of smaller European territories. In the southern part of Spain we see something similar but, at the same time different: the alcázar, a castle that (in most cases) was built by Muslim rulers in the 8th-15th centuries.

Meanwhile, the castles elsewhere are… different. Many castles around the world correspond to another type of structure – these are fortresses where a whole garrison lives and also – walled cities with numerous houses inside.

A monument of world importance, this is the chief residence of the Dalai Lama. The first palace was built here in 637, while the current palace was built in 1645 at 13 floors and 117 meters high. It contains 1000 rooms and numerous monuments of art and knowledge, although most of them have been lost since the Chinese invasion.
This outstanding structure has all the characteristics of castle – it is built on the top of hill, has fortification walls and has served as a place of residence for Dalai Lamas.

One of the most prominent and impressive medieval castles in the world. Kurds developed a fortress since the 11th century here, but Crusaders rebuilt it in the 1140ies – 1170 and in the 13th century. The best example of traditional Japanese castle architecture. This castle is a group of 83 buildings and extensive defensive systems. Construction started in 1333, major rebuilding took place in the 16th century and in 1601 – 1609. One of the most impressive forts in India, towering above the city on 122 metres high hill. Includes several palaces. Construction started in 1459. Huge palace and fortress with major cultural importance. The fortress was first constructed here in 889 AD, and the royal palace for the Sultan of Granada was built in 1333. A major achievement of Muslim architecture and art. Palace and its gardens were supposed to represent Paradise.

One of the major castles and palaces of the world. This castle was built by William the Conqueror and since then used as a royal palace. Longest occupied palace in Europe, and the largest inhabited palace in the world. Throughout the centuries the castle was largely extended, always trying to imitate early medieval designs. Beautiful interiors. Site of many important historical events. Royal palace and fortress. White Tower – the central keep – was constructed in 1078 – 1087 by William the Conqueror and represents an outstanding example of Norman architecture. This enormous keep is 27.4 m high, with walls up to 3.4 m thick. Used as a prison already in 1100. Over the centuries extended with numerous buildings within two concentric rings of defensive walls and a moat. A building of outstanding historical importance. Tower houses Crown Jewels. This well-known site of legends is reportedly haunted. Magnificent and famous Renaissance castle with a star fort around it. This castle plays important role in Shakespeare’s Hamlet. Initially built in the 1420ies, rebuilt in its current form in 1574 – 1585. A place of interesting history and legends. Very impressive hilltop castle. Construction started before 1157, the castle still is owned by its original owners. Castle has some 100 rooms and at times up to 100 members of the family have been living here. The tallest wing – Greater Rodendorf House – has 10 floors. Beautiful interiors. 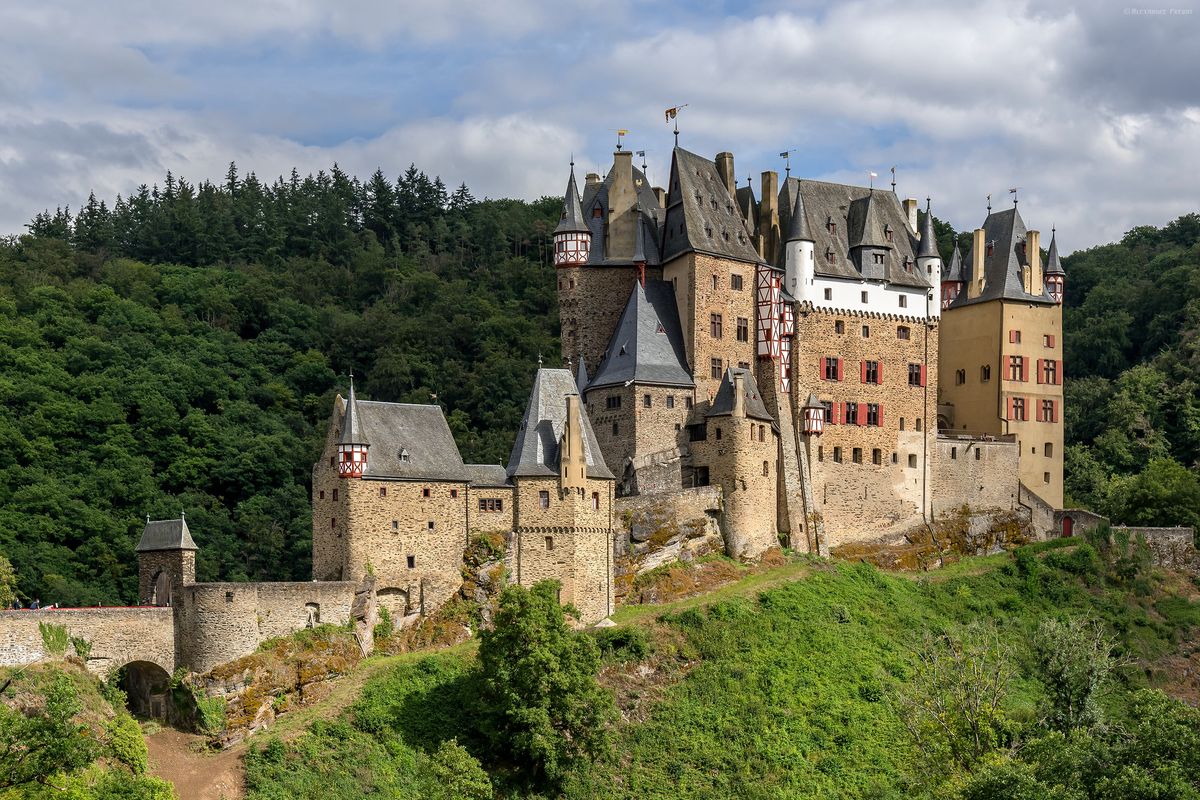 A massive cylindrical tower. Initially, it was built as a mausoleum for the Roman emperor Hadrian in 123-139 AD, and the ashes of the next emperors were laid there as well. Most of this was lost around 401 AD when the tower was converted into a fortress. In the 14th century, it was converted into a castle for popes. It served also as a prison for such people as Giordano Bruno, Benvenuto Cellini, and Cagliostro. Now it is a museum. One of the most impressive medieval castles in England, constructed in 1068 by William the Conqueror. Site of important historical events. Part of the castle was turned into a country house in the early 17th century. Grounds contain the largest trebuchet in the world. Site of legends about ghosts.

An enormous and impressive hilltop castle. The current castle was constructed in 1846 – 1867 in Neo-Gothic style on the site of earlier castles – thus it is not a true castle, but not a classical palace either.

One of the most impressive Renaissance palaces in the world, built over the water in 1515 – 1521. Beautiful interiors and valuable collections of art. Very interesting and scenic park around the castle, including a labyrinth of yew trees. A large Renaissance castle was built at the entrance of an enormous cave. This location was chosen with the purpose to make it easy to defend the castle or escape from it. The first castle was built here in the 13th century, but the current one – was in 1570. Behind the castle starts the 13 km long Predjama Cave. A mysterious, impressive building that resembles a fortification. In plan, it is an octagonal prism. It was constructed in 1240-1250 and was never finished. Its intended use is not clear. The fortress was used as a prison and also as a refuge during the plague. A magnificent castle that was constructed in the 12th century and then extended and rebuilt several times. The last restoration in the 19th century changed the original castle a lot, but, nevertheless, the result is a gorgeous structure with interesting replicas of medieval fortifications. One of the largest castles in Europe, well preserved and visually very impressive late Gothic-Renaissance structure. Castle was constructed in many phases from 1446 – the 19th century. Site of legends with purported sightings of paranormal phenomena.

One of the most beautiful castles anywhere, located on an island on Lake Geneva. Constructed in 10th – 13th centuries although there existed a fortification already during the Roman times. The oldest dated parts of the castle are from 1005. Large, well-preserved, and historically important castle, founded in the 12th century on the site of earlier fortifications. Contains the only medieval counter tunnel in the world, built for the surprise attack on the French in 1216. Extensive, more than 5 km long tunnels under the castle were used as a command center during the Second World War. Well preserved castle in the center of Ghent. Castle has a fortification wall and a castle in the middle. Constructed in 1180. Now, this is a museum.

The best preserved Renaissance water castle in Europe – a large and beautiful brick building. The current building was constructed in 1554. Around the castle are set gardens with Renaissance parts, a fuchsia garden, and old hedge mazes. 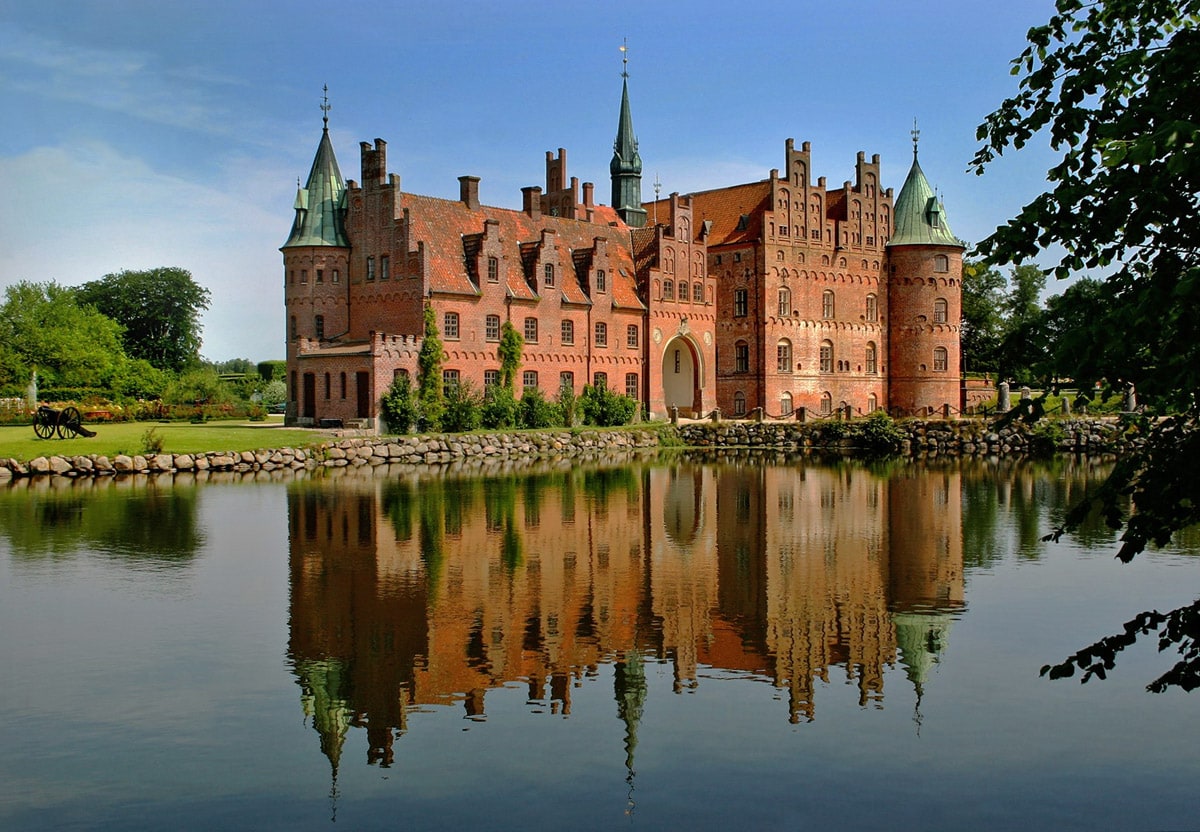 This large, impressive castle is one of the main landmarks in Naples. This royal castle was built in 1282 and rebuilt in 1479. Castle has a massive appearance and interesting detail is the triumphal arch – an ornate Renaissance facade between two castle towers. The castle contains numerous interesting details and works of art. The Rock of Cashel

An enormous castle and later church, seat of the kings of Munster. It was donated to the Church in 1101. One of the most impressive medieval castles anywhere. The tallest part is a 28 m tall round tower from 1100 AD, made from dry stone. Impressive is Cormac’s Chapel – a sophisticated Romanesque structure with a beautiful fresco.

This sumptuously illustrated history presents, in an updated new edition, an in-depth account of Britain’s most important buildings.

Life in a Medieval Castle

Medieval history comes alive in Joseph and Frances Gies’s Life in a Medieval Castle, used as a research resource by George R. R. Martin in creating the world of Game of Thrones.

Newly reissued for the first time in decades, Life in a Medieval Castle is the bestselling classic that has introduced countless readers to the wonders of the Middle Ages.