Liang Bua – the cave of the mysterious Homo floresiensis Group of caves in lush rainforest. In these caves lives unique subspecies or, rather, newly developing species of dwarf crocodiles (Osteolamus tetraspis) that feed on bats. 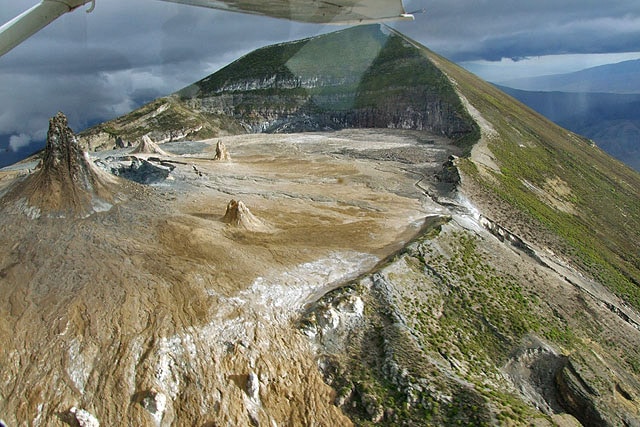 The only known carbonatite volcano in the world (except for the neighboring Kerimasi volcano). The volcano produces natrocarbonatite lava with nearly unique minerals – nyerereite and gregoryite. Lava flows at very low temperature at 500 – 600 ° C. Carbonates react with the moisture of the atmosphere and quickly turn white, creating a unique volcanic landscape. Here in a steep cone has been observed formation of a new, nearly unique lava cave with enormous stalactites made of fragile natrocarbonatite. Unusual crater – up to 40 m tall and 160 m wide mound/ring of limestone blocks with a smaller mound inside. Most likely it was created by a gaseous eruption some centuries ago. Almost unique phenomenon – submarine tufa columns created by cold seeps from submarine springs. Columns are formed of ikaite – an unstable mineral that disintegrates in temperatures above 6 – 7 ° C. In total there are more than 600 such columns up to 18 m tall. The only known site on Earth, where natural nuclear fission has taken place approximately 1.7 billion years ago in some 16 closely located sites. The evidence of this has been testified through an unusual composition of uranium, neodymium, ruthenium, and other materials. A unique pool of liquid sulfur at the summit of a submarine volcano, one of the few in the world. Almost unique natural landmark – a naturally formed tufa wall with a stream flowing along its upper rim and depositing further extension to this cliff. Wall is some 40 – 50 m long and up to 5.4 m tall. Frozen lake with unique geochemistry. The east lobe of the lake is saturated with nitrous oxide – "laughing gas" and dimethylsulfoxide. Another part of lake is rich with dimethylsulfide – possibly produced by microorganisms.

Cave with giant selenite crystals up to 12 meters long and 55 tons heavy. The air temperature in the cave is up to 58 °C high. Now flooded.