Long ago, in distant past in the area of present-day Afghanistan evolved amazing cultures – here met Indian, Greek, Persian civilizations and unique local cultures. Recent decades have been harsh and some magnificent wonders of the past have been lost (including two giant statues of Buddha in Bamyan). Nevertheless many still exist. The most amazing landmarks in Afghanistan are:

For several millenia here is mined the best lapis lazuli in the world. Rich find of some of the best emeralds in the world.

Finds of the best known kunzite and other types of spodumene crystals (gemstones up to 1 m long), as well as tourmaline (possibly the best elbaite in the world), beryl (morganite, aquamarine and other types), garnets and other gems.

Group of six deep blue lakes that are separated by natural dams of tufa, forming up to 10 m tall and 3 m thick walls. Lakes and tufa walls have been formed by spring water that contains calcium carbonate. Lakes are located in a beautiful canyon and represent a unique landscape. The deepest lake is at least 150 m deep. Not too far is located another lake with natural tufa dam – Band-e Azhdahar. Giant natural arch over the canyon. Span of arch at its base is 64.2 m.

Unique monument of culture consisting of more than 50 rock-cut caves and several monolithic statues of Buddhas up to 53 m high from the 5th – 9th centuries AD. Caves contain medieval paintings. Smaller statue of Buddha was built in 507 AD, the larger one – in 554 AD. The best known and largest statues were deliberately destroyed by Taliban in March 2001. Group of more than 100 rock cut caves near Bamyan Caves that were created in the 6th – 13th centuries as Buddhist shrines. Here are found remnants of 10 m tall standing Buddha, frescoes from the Sassanian period.

Remnants of Greek-Bactrian city, founded in 280 BC by Antiochus I. Important centre of Hellenism, one of furthest Hellenistic cities. Declined in 145 AD. City was protected by walls and towers and included theater in Greek style, palace, enormous gymnasium, temples. Numerous sculptures and architectural details in Greek style have been found here.

Seven groups of rock-cut cave temples, in total some 150 caves. These Buddhist caves have several types of planning – some were built as dwellings, some – as temples.

Remnants of large (21 ha) prehistoric city with artifacts of Harappan and Indus Valley civilizations. City was large already at 2400 BC but some centuries later it was not occupied anymore.

Rock cut Buddhist shrine that is adorned with ornaments.

Remnants of a fortified city, enclosed in 390 by 390 m large rectangle of fortification walls. This settlement developed in the times of Kushan Empire. In the center is round hill – citadel. Here is found also a temple with wall paintings in Hellenistic style.

Remnants of a fortress – settlement on the Silk Road. Settlement existed from the 6th to the 10th century AD.

Shrine of Ali in Mazar-i-Sharif

Gorgeous mosque with turquoise colored domes, one of the most venerated shrines in Afghanistan. First mosque was destroyed by Genghis Khan around 1220 and the current building was built in the 15th century. Constructed above the purported grave of Ali ibn Abi Talib. Some through consider that here is buried Zoroaster. Beautiful, 62 m tall minaret. It was built in 1190 from bricks. Minaret is beautiful – with stucco, glazed tiles, adorned with calligraphy. Tower is endangered and can collapse in any moment. It might be located in the Firozkoh (Turquoise Mountain) – the lost capital of ancient Ghorid state. 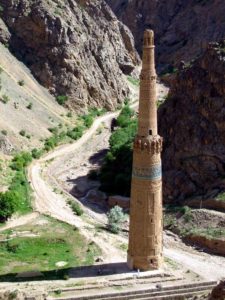 Sophisticated, 11.5 ha large medieval garden. This garden was created in the time of emperor Babur after 1504 and is one of the oldest existing Mughal gardens, an exceptional example of Islamic garden architecture. Babur personally supervised the creation of this garden and later he was buried here. The garden was reconstructed and well-tended also in the coming centuries. One of the oldest cities in region (founded in 2000 – 1500 BC), ancient center of Zoroastrianism, where, reportedly, Zoroaster died. To the north from the center is located Bala Hisar of Balkh – ancient citadel that still is surrounded by city walls. Earthen walls around the city are some 10 km long.

Ancient, fortified center of Herat. City was established around 500 BC, Alexander the Great was here in 330 BC. The enormous fortress has been renovated and is housing a museum.

Ancient citadel of Kabul, built around the 5th century AD. Here start Walls of Kabul that are up to 6.1 m tall and 3.7 m thick. This mosque was constructed in the first half of the 15th century. Although the building is in a bad state, it is an excellent representative of Timurid architecture.

Massive, impressive fortress. First fortifications were built here around 500 BC or earlier, serving as a fortification on the Silk Road between India and Persia. Walls are some 2.5 km long and 15 m high.

Possibly the oldest Islamic structure in the area of Afghanistan, built in the 9th century AD. Grave is 20 by 20 meters large, interior is adorned with sophisticated stucco.

Afghanistan: A Military History from Alexander the Great to the War against the Taliban

For over 2,500 years, the forbidding territory of Afghanistan has served as a vital crossroads for armies and has witnessed history-shaping clashes between civilizations: Greek, Arab, Mongol, and Tartar, and, in more recent times, British, Russian, and American. When U.S. troops entered Afghanistan in the weeks following September 11, 2001, they overthrew the Afghan Taliban regime and sent the terrorists it harbored on the run. But America’s initial easy victory is in sharp contrast to the difficulties it faces today in confronting the Taliban resurgence.

Religions of the Hindukush: The Pre-Islamic Heritage of Eastern Afghanistan

Detailed study of the pre-Islamic religious and tribal culture of Eastern Afghanistan; an important contribution which is both readable and scholarly.