This enormous country is sparsely populated – but quite rich with natural and man-made heritage. The most amazing wonders of Mongolia are: Impressive, narrow gorge with up to 200 m tall cliffs. Ice field persists in this gorge throughout most of the year, although lately it disappears at the end of summer.

Granite monolith that is abruptly rising from the ground, 25 m tall. Sacred place.

An enormous monolith – rock that resembles a turtle. 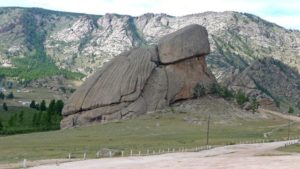 The tallest waterfall in Mongolia, some 70 m tall.

One of the richest and most interesting fossil finds on Earth. This was the first site where dinosaur eggs were found, here have been found remnants of Velociraptor and other Cretaceous dinosaurs. One of the most impressive groups of Deer stones and other monuments. 14 standing stones with beautiful carved deer on their surfaces. Constructed in 1000 BC (?). The most sacred mountain in Mongolia, the first mountain declared to be sacred by Genghis Khan. It is possible that he was born nearby and could be buried here as well.

Monuments – two standing steles that were erected in 722 AD to commemorate the deeds of Tonyukuk – great statesman of the past. Steles are covered with Orkhon-Turkic script and tell the history of Turks, are similar to epics.

Site with five deer stones. The tallest one is 3.8 m tall.

Some 5000 groups of prehistoric drawings, each depicting a certain scheme. Many drawings seem to be oriented towards the sacred mountain – Shiviit Khairkhan.

Winter Palace of the Bogd Khan

The only remaining palace of the emperor of Mongolia, Bogd Khan. This complex of buildings includes six temples, natural and art collections of Bogd Khan. The largest equestrian statue in the world, 40 m tall. Depicts Genghis Khan on horseback. Statue stands on the building of visitor center. Constructed in 2008. Park and architectonic complex is arranged around the statue.

Principal center of Buddhist learning in Mongolia, the only monastery that persisted during the Socialist times. Founded in 1727. Contains 26.5 m tall statue of Migjid Janraisig, covered with gold and 2 286 gemstones.

The oldest existing Buddhist monastery in Mongolia, founded in 1585. It was almost completely destroyed by Communists in 1939. Somewhat mysterious, approximately 240 km² large area that is carefully guarded for many centuries since the death of Ghengis Khan in 1227. It is possible that here is located the tomb of Genghis Khan. This beautiful woodland was guarded by Darkhad, who killed anyone entering it. In Socialist times it was heavily guarded by armed forces, now opened only for scientific research. Many Mongols consider that disturbance to this place can cause a catastrophe to mankind.

The most sacred mountain in Mongolia, the first mountain declared to be sacred by Genghis Khan. It is possible that he was born nearby and could be buried here as well.

One of oldest monasteries in Mongolia, established by Zanabazar in 1647. Destroyed in 1937, now reconstructed.

One of the most interesting monasteries in Mongolia, built in 1727 – 1736. Constructed in a green site rich with Mongolian cherries and diverse archaeological landmarks. Now here remain 28 temples on 207 x 175 m large platform. Temples have interesting engineering solutions. An important monastery, established by Zanabazar in 1654 in a spectacular mountaintop location. Heavily damaged by Communists in the 1930ies but revived. Site of legends.

60 cm long statue of penis, located on a stone platform. Possibly linked to nearby Erdene Zuu monastery in order to remind about the importance of celibate.

3.2 km long and approximately 3 m tall stone wall, built in the time period from the 8th to 10th centuries. Near this wall are more than 60 old graves – possible royal graveyard.

This museum contains unique collections of dinosaur fossils (including “fighting dinosaurs”), meteorites and other unique finds in Mongolia.

Mongolia is a land of constant surprises. Renowned for its classic rolling steppe land -from where, in times past, nomadic Mongol clans and confederations swept out to conquer much of the known world.

Mongolia is landlocked between its neighbors China and Russia in the heart of Asia. For centuries after the disintegration of Genghis Khan’s empire, it was ruled by one or the other, but in 1990 the Mongols embraced democracy. Now, after two centuries of Manchu stagnation and seventy years of Soviet communism, they are rebuilding their national heritage. Rarely in the news but making progress toward a market economy, this resource-rich but the infrastructure-poor country is a land of pioneers, and its greatest asset is the Mongol people, who are friendly, cooperative, ambitious, and well educated.