Sweden is a prosperous country with a rich natural and cultural heritage.

This North European country can not boast with the world’s most impressive man-made or natural attractions, but it has a bit of everything. Some of the most impressive wonders of Sweden are:

Map with the described wonders of Sweden

Mountain with more than 400 m tall, nearly vertical cliff side towards Rapa Valley. At the base of mountain is located important Sieidi – Sami sacred place. Reconstructed Iron Age fort in the desolate Stora Alvaret. This is impressive ringfort that was originally constructed around 400 AD. Ringfort has a diameter of some 80 m and is surrounded by a tall wall. A stone ship 67 metres long, one of the largest stone ships. Formed from 59 large boulders, up to 1.8 tonnes heavy. Most likely built sometimes around 600 AD.

This stone has the longest known inscription (760 runes) in runestone. This long writing was probably carved in the early 9th century and represents an early example of Swedish literature. Inscription contains references to lost Norse mythology and the Western Roman emperor. Text is partly deciphered, albeit very hard to read and understand.

Stone labyrinth – stone setting on the bare granite surface of Blå Jungfrun island – small island rising 86 m above the sea. The island is seen as evil magical place in folklore, a place of witch gathering. Royal palace and gardens on an island in Lake Mälaren. Buildings constructed in the late 16th – 18th century. Much of the ornate interior is in Rococo style. Castle grounds contain well preserved theater (1766) with intact machinery and fine Chinese pavilion (1769) in Rococo style. Lush gardens around the palace are in Baroque and English styles. One of the best preserved medieval cities in Northern Europe, with 3.4 km long city walls. City flourished in the 10th – 16th century. Enormous castle in Renaissance style. First fortress was built here in 1380, current castle was built in 1537 – 1709. Contains National Portrait Gallery – one of the oldest portrait collections in the world.

Medieval castle, constructed in the 12th century and rebuilt in Renaissance style in the 16th century. One of the best preserved Renaissance castles in Sweden.

Gothic church, oldest parts were built in the late 13th century. Church has served as burial site for many Swedish monarchs.

One of the most prominent medieval castles in Sweden. Construction started in 1298, castle was rebuilt and extended in later times. Now castle has more than 250 rooms. Royal palace in Baroque style. It is built on island in the site of medieval castle. Constructed in 1669 – 1674. Especially valuable are the beautiful interiors and collection of Swedish paintings.

The first ethnographic open-air museum in the world, founded in 1891. Museum includes a full scale replica of the 19th century town, zoo and other attractions. Former royal castle, built in 1545 at the shore of Lake Vättern. One of the best examples of Swedish Renaissance.

Large cathedral, built mainly in Romanesque style. The first cathedral was built here before 1085 but the construction date of the current cathedral is not known – it is between 1104 and 1123. 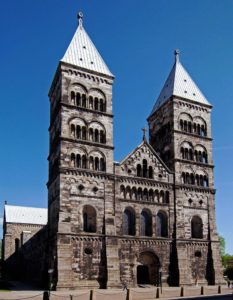 The tallest church in Scandinavia, 118.7 m tall. Uppsala Cathedral was built in the late 13th century to replace the strong pagan beliefs in the site of the main pagan shrine in this region. Cathedral is constructed in brick Gothic style.

Medieval monastery, one of the best preserved monasteries in Sweden. Founded in 1267. Consists of three buildings, represents one of the most outstanding examples of brick Gothic in Sweden.

Well preserved church village – 424 wooden houses around an early stone church from the 15th century. Village was inhabited only in Sundays and church holidays, when people from countryside came to the church and stayed here overnight. Village developed since the middle of the 16th century.

This city hall building belongs to most outstanding examples of National Romantic style. The massive building was constructed in 1911 – 1923 and its dominant is 106 m tall tower. Old and interesting church, built in Romanesque style in the 12th century. Church is richly adorned with frescoes and sculptures in archaic style that shows influence of Byzantine style – most likely from Byzantium and Russia.

DK Eyewitness Travel Guide: Sweden is your expert guide to this breathtaking country. The fully updated guide includes unique cutaways, floor plans, and reconstructions of the must-see sights, plus street-by-street maps of all cities and towns.

Explore Europe’s most prosperous corner: a smorgasbord of Viking ships, brooding castles, and emerald fjords. With Rick Steves on your side, Scandinavia can be yours!