The most exotic country in Arabian peninsula is Yemen. Many peculiar wonders are found in Yemen but the most interesting ones are:

Comparatively large, approximately 3 km long cave with beautiful stalactites and stalagmites, endemic cave fauna. In the cave have been found ancient ceramics, cave art, and wooden tablet with writings dated from 258 AD. Writings on the walls of the cave have been left by Arabs, Indians (Brahmi script), Greek. Volcano with a crater lake with unusual, green water.

The best and last forest of some of the most unusual looking trees in the world – Dragon’s Blood Tree (Dracaena cinnabari).

One of the last subtropical forests in the Southern Arabia, located in granitic mountains. Forest has five altitude zones. Here are found numerous endemic plants.

This ancient city was built before 450 BC, the capital of the Minaean kingdom in the 4th century BC. The city was abandoned in the 1960ies and now there are ruins over an artificial hill consisting of the cultural layer. Parts of the ancient, 14 m tall city walls still exist.

One of the engineering wonders of the ancient world, built in the 8th century BC or earlier. The oldest known dam in the world. The original dam was 580 m long and 4 m high, later it became larger. There are also other ancient dams of similar age nearby. Dam suffered often but nevertheless has left a profound influence on the development of South Arabian civilization. Ruins of the former Saabean capital city that flourished in the first millenium BC. A distinct culture developed here – even with specific writing. Near the city are found ruins of Mahram Bilqis or Awwam Temple with a row of rectangular columns. This temple of Moon god had a huge importance in the region. Large group (hundreds) of rock-cut tombs from the Paleolithic age, with embalmed mummies and relics.

Impressive display of the unique Yemeni urban planning and architecture. Sana’a is founded before 500 BC and here are buildings that are more than 1,400 years old. The city walls are 9 – 14 m tall, the old city contains more than 100 mosques, 6,500 houses. Most of the houses are highrise buildings and are ornamented. Unique, fortified city. Shibam is an old city, first mentioned in the 3rd century AD. This densely built city has some 500 tower houses, each rising 5 to 11 stories (more than 30 m) high. Most houses have been built since the 16th century. The city is enclosed by a wall. Exceptionally well preserved medieval town, one of the most beautiful ones in Yemen. Town was founded in Himyarite period (the 1st century BC – 6th century AD), it is surrounded by nearly intact, 2 km long city walls that are 5 – 7 m tall. City has some 600 well preserved medieval houses that form dense clusters with narrow streets. The former capital of Yemen, outstanding medieval center of learning. Founded before the 7th century AD, flourished in the 13th – 15th century. Four gates remain from the former fortification walls. The city contains a multitude of ornate buildings including 86 mosques. 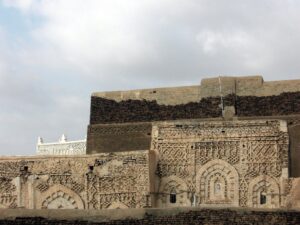 Fortified medieval village perched on a cliff in the Haraz Mountains, built in the 12th century. The ornate houses are built over an abyss and look very impressive. Mountain city: an ancient capital that flourished in the 11th – 12th centuries. The beautiful, well preserved city forms a harmonious whole with the surrounding agrarian landscape. Steep streets of Jibla are nearly unusable for cars. Houses are adorned with stucco reliefs, in the city are beautiful mosques, Palace of Queen with 365 rooms, medieval aqueduct.

One of the oldest mosques, could be built in the 7th century AD, most likely during the lifetime of Muhammad. Interior structures have Byzantine architecture features. Site of great historical importance. The former capital of Yemen in the 12th – 14th century. Historical core part of the city has been preserved comparatively well and here are found many old, ornate buildings. A very old mosque, constructed in 820 AD. Central mosque of once very important center of teaching. One of the most ornate mosques in this region, constructed in 1504. This large structure is rectangular, adorned with six large domes. Especially impressive are the painted frescoes inside – geometric and floral motifs in exceptionally high quality.

Old and impressive bridge that was built over some 300 m deep canyon in the 17th century.

Historical palace that is perched on a 450 m tall hill above the city center. A picturesque town with traditional Yemenese mud houses. The town is located at the bottom of the impressive Wadi Doan canyon.

A well-preserved medieval city, founded in the 9th century. The city was the center of Zaydism – a school of Muslim thought. The city is enclosed with fortification walls – an earthen rampart that is 3 km long and 4 m wide, with 52 watchtowers and 16 gates. Here are found 14 medieval mosques that were built in the 10th – 16th century. Near the city is a large and ancient Zaydite cemetery with an extensive collection of richly ornamented steles. This mosque has a very impressive and ornate, 53 m tall minaret that was built in 1914. A country long regarded by classical geographers as a fabulous land where flying serpents guarded sacred incense groves, while medieval Arab visitors told tales of disappearing islands and menstruating mountains. Our current ideas of this country at the southern tip of the Arabian Peninsula have been hijacked by images of the terrorist strongholds, drone attacks, and diplomatic tensions. But, as Mackintosh-Smith reminds us in this newly updated book, there is another Arabia. Yemen may be a part of Arabia, but it is like no place on earth.

The staggering breadth and diversity of Yemen’s landscapes and peoples is not something easily conveyed. Here, in this remarkable celebration of his homeland, Mahmoud Al-Shaibani presents a breathtaking panorama that sweeps in the mountains and valleys, the plains and seas, and the myriad of different communities that live in this ancient land.