Arai Te Tonga – the most sacred marae in Rarotonga

The story of Arai Te Tonga started around 1250 AD. According to local legends back then in the open sea met two groups of ocean-going canoes full with settlers who were looking for new lands. One group brought Takitumu people from Tahiti, led by Tangi’Nui. He was fleeing from his elder brother Tutapu. The other canoes brought people from Samoa led by Karika.

Australia and Oceania, Polynesia, Cook Islands, Rarotonga, at Ara Metua, inland from it, 3 km east from the centre of Avarua

Tangi’nui with his 400 people found a beautiful island – Rarotonga. There were already living Polynesians but newcomers quickly conquered them.

The vigorous Tangi’Nui managed to set the future spatial planning of whole Rarotonga island by setting up 47 marae and related structures, most of them close to the ancient road.

Later here turned up also the other group led by Kariki, and, as Tangi’Nui needed allies in his war with brother Tutapu, it was agreed that Samoans will obtain the sacred land where the first marae was built and family of Kariki – Makea – will have the supreme power on island.

This was observed up to early the 20th century, although not without wars and constant conflicting between the families.

Matakeinangas – local communities of rarotongans – were ruled by ngati – councils. Senior member of each ngati was mata’iapo – chief. Highest chiefs were called – ariki.

Marae served as a place where the power and status of mata’iapo and ariki was represented – but marae was also a house of gods.

The main site of Rarotonga

Obviously, the main marae of the Rarotonga island was the marae owned by ruling family – Makea. Their sanctuary – Arai Te Tonga – was as public as it may be: the main road of the island went through it. Ariki of Makea (you still manage to follow the terminology of Polynesian civilization?) was living next to the Ara Metua road some 100 m to the east from marae and there, next to the road and facing it, were aligned stone seats used for ceremonies by the representatives of other families of the island.

Arai Te Tonga – the sanctuary itself – still exists and consists of many very important parts.

One part is platform – some 3.5 m long, 2 m wide, 0.2 m high. It is a base of the wooden structure where during the ceremonies was main ariki. Unfortunately, nothing remains of this building. Other features are stone seats along the road (other seats, not the ones next to the house of ariki). On one the main ariki received gifts with the priest sitting next to him. One of the basalt slabs was maringi-toto – here were laid the heads of human victims sacrificed to gods.

Important stone is tau-makeva – nearly 2 m tall, a bit inclined basalt slab, reportedly brought from Hawaii. Here was approved new ariki – this man was lifted up on the top of stone – and afterwards carried south to another marae.

At least until the beginning of the 20th century in Arai Te Tonga was growing also enormous utu tree (Barringtonia asiatica), which, according to local stories, was growing here already in 1250 AD. Nowadays only a large stump of this tree remains.

Many ceremonies and festivities were held in Arai Te Tonga by many generations, for long centuries everyone in Rarotonga looked at this place with worship, terror, joy. 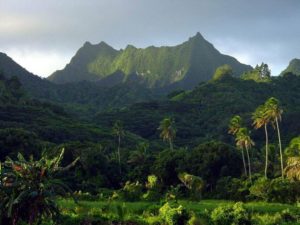 The diverse Cook Islands represent a true spirit of southern seas: on many of these islands, people still are living slow-paced and tasty lives amidst beautiful scenery. As always, there is the other side of the coin: frequent warfare in the past, terrible hurricanes, and worries about the rising sea levels. Islands are associated with New Zealand – but nevertheless, they represent an independent nation.

Third Edition of this popular Cook Islands Guidebook, containing updated information on all populated islands of the Cook Island chain. The 3rd edition is the initial e-book edition, enabling readers with wi-fi connections to access Web sites and e-mail addresses by clicking on the text of the book. The guide includes complete lodging and restaurant information as well as guides to the various tours and island night performances.

Lonely Planet Rarotonga, Samoa & Tonga is your passport to the most relevant, up-to-date advice on what to see and skip, and what hidden discoveries await you. Surf the swells around the southern coastlines, hike the challenging Cross-Island Track, or check out Tonga’s ‘Stonehenge of the Pacific’; all with your trusted travel companion. Get to the heart of Rarotonga, Samoa, and Tonga and begin your journey now!