Kitum Cave – salt mine of elephants

Some of world’s most unusual caves are located at the foot of Mount Elgon. Here, in thick forests among the trees are hidden some shallow, wide hollows which have been created not only by geological processes but also by… elephants. The best known of these caves is Kitum Cave.

Africa, Kenya, Trans Nzoia District, on the forested south-eastern slope of Mount Elgon, at the height of 2 409 m

How this cave was created?

Mount Elgon (4,321 m tall) is an ancient shield volcano, which formed at least 24 million years ago and is extinct. This is an enormous, wide mountain which step by step rises above the dry plains of Kenya and Uganda. As the land rises, climate and vegetation change – and at the height of some 2 – 3 kilometers above the sea, there is a thick forest with many rare plants and animals and a comparatively cool climate.

Small streams flow through the forest and at the ends of ancient lava tongues, small waterfalls are forming. Here the force of falling water creates small grottoes behind the curtain of the waterfall. Most likely Kitum Cave started to form from such grotto behind a waterfall. After all – there still is a waterfall at the entrance of the cave.

Kitum Cave has formed in pyroclastic rocks – e.g. rocks that have been created by an erupting volcano. Here are several diverse layers, most likely created by several eruptions. Above is a layer of hard volcanic agglomerate and below it – somewhat softer rock.

The softer lava contains soluble salts. The upper layer protects it from the water thus salt still is there. The damp air behind the waterfall, in the hollow, is leaching from this lave pure sodium sulfate and wonderful, fragile crystals of mirabilite are forming on the rock surface.

In fact, salt crystals in these caves are some of the best anywhere and Kitum Cave has not only mirabilite but other salt crystals as well: halite, anhydrite, polyhalite, natron, and others.

Lava has preserved the remnants of the plants which were growing here in the Miocene epoch and were eliminated by the eruption of Mount Elgon. Visitors can admire fossils of large tree trunks, tree branches, and even occasional bones of extinct animals in the ceiling of the cave.

Just like any other animal, elephants need salt to stay healthy – but these large animals need a lot of it, as much as 160 grams every day! Thus these giant animals are happy to find as much salt as possible.

On the slopes of Mount Elgon, their wishes can be fulfilled. Sometimes elephants manage to find the salt on the land surface but the best finds are in the caves.

It seems, at first elephants were reaching for the salty cliffs in the hollows behind the waterfalls. As they consumed the salty rock, hollows became larger and larger, and gradually whole caves were carved by the tusks of elephants!

Research shows that indeed – these powerful animals were chipping the rock pieces from the cave wall with their tusks. As pieces of lava fell on the floor, elephants chewed these pieces as delicious candies. Thus over the time of some 8,500 – 12,000 years elephants created the current cave.

Elephants were not alone here – other animals, such as bushbuck also came to “mine the salt” here. Bushbuck also could chip off smaller pieces of the rock. Other animals had to be satisfied with remnants left after elephants.

Dangers in the darkness

As the cave was extended, elephants had to walk through complete darkness to reach the salt – and this became risky. The situation was used by leopards and hyenas – these predators hid in the darkness and waited for smaller and weaker animals to come. Quite a few young elephants, buffaloes, and bushbucks perished in the cave.

There were other dangers too. As the cave room is extended, the ceiling of the extensive room collapses under its own weight. After all, elephants do not care about the structural strength of the cave too much and just dig it wider and wider. In 1982 in Kitum Cave elephants caused one such collapse and at least one elephant died.

But the worst happened in the 1960ies – 1980ies. Poachers discovered the habits of local elephants, hid at the entrance, and ambushed all the elephants approaching the caves. The population of local elephants decreased from 1200 to a mere 100.

Part of the local elephants decided to quit and are avoiding the caves up to this day. Other elephants learned to come silently in the night – and sometimes visitors manage to see them while hiding in the caves through the night.

With the development of tourism and nature conservation, poachers are less active. After all, tourism brings a steady income now. Another danger though comes from the increasing number of people in Kenya and encroachment of agriculture on the forest – thus elephants have less forest left.

The caves at Mount Elgon seem to be the only caves in the world made and visited by the elephants on a regular basis and elephants are transferring the knowledge about the caves from one generation to the next.

The best known – Kitum Cave – is up to 165 m long and up to 60 m wide, with a comparatively low ceiling. The cave consists of two large, rounded chambers. Elephants are entering the largest chamber and go deep inside, reaching the furthest corner – the fresh “salt mine”. Humans have also played some role in the development of these caves – until the 1960ies the salt was removed with pick-axes and salty rocks were used for the cattle.

There are four more “elephant” caves nearby – the largest is the impressive Mackingeny cave, 250 m long. This and Chepnyalil cave (26 m) also are available to the visitors of the park. Two more caves are Ngwarisha cave (150 m, here live around 100,000 bats) and the small Kiptoro cave (10 m).

All five caves have waterfalls that fall over their entrances. Most likely there are some more similar caves in this area.

The deadly Marburg virus and bats

In 1980 one French visitor after the visit to this cave became ill and soon died from a hemorrhagic fever. His doctor – Shem Musoke – also became ill but survived.

In 1987 another visitor of the cave – 15 years old Danish boy – became ill and died with similar symptoms.

An expedition of the US Army Medical Research Institute of Infectious Disease tried to find the source of the infection soon after but had no success.

This deadly illness was Marburg virus disease. In the first case, it was caused by the Marburg virus, in the second – by the similar Ravn virus. This illness is almost always deadly. 81% of patients do not survive, thus it is more dangerous than Ebola virus disease.

Only in 2007 the research in other caves – mines in Gabon and Uganda – gave some results. Turns out, the Egyptian fruit bats (Rousettus aegyptiacus) are to blame – these small, noisy bats sometimes carry this disease although it is still not clear where bats get these viruses. It seems the illness might be spread by the dust of bat guano.

Since the 1980ies thousands of people have entered the cave without any health problems – but no one can feel sure in the future.

In all five caves Egyptian fruit bats, as well as other bats species (such as horseshoe bats Miniopterus schreibersi) definitely are present. In some caves, bat colonies are very large – with tens of thousands of these small animals. This huge mass of bats warms up the cool air of caves, they create a thick and pungent layer of guano.

Countless bed bugs live here – usually feasting on bats but upon a possibility attacking everyone who enters this small realm.

Local people knew about these “elephant caves” for centuries. White people learned about them in the 19th century. It might be that H. Rider Haggard’s novel “King Solomon’s Mine” (1885) was partly inspired by this phenomenon of nature. These caves were described also by Joseph Thompson in the book “Through Masai Land” (1985). Thompson could not figure out whether these caves were made by human or natural activity. Some even considered that the marks on the walls were created by the ancient Egyptians mining the diamonds here.

Only in 1982 there was concluded that at least the Kitum cave to a large extent is made by elephants (Redmond, 1992).

Now, in spite of all the real and imaginary dangers, Kitum cave and other “elephant caves” nearby are popular tourist destinations. 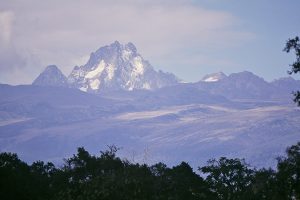 Kenya has a very diverse natural and cultural heritage with some truly unique monuments. Among the highlights of the country should be mentioned remnants of the very first humans, the exciting “islands” of biodiversity – remnants of ancient tropical rainforest on isolated mountain ranges and the old coastal cities and villages.

Cave Geology is the definitive book on the subject by an internationally recognized authority. It can be easily understood by non-scientists but also covers a wide range of topics in enough detail to be used by advanced researchers. Illustrated with more than 500 black-and-white photographs and 250 diagrams and maps.