Category includes outstanding rock-cut architecture and large rock cut sculptures. In order to be included in this category, landmarks should be made of a single piece of natural stone without moving this material from its original place. Thus here are not included such unique monuments as Ahu Tongariki and other giant stone sculptures of Rapa Nui – they have been transported away from stone-pits.

Many monuments of rock-cut architecture are extremely durable due to high resistivity of rock. This resistivity and constant climate inside these structures have helped to preserve ancient art – such as the oldest known oil paintings in Bamyan Caves (Afghanistan) from the 8th century AD or beautiful tempera paintings from the 1st century BC in Ajanta Cave No.10 (India) and many other artworks. Inside the rock cut structures there have been preserved ancient sculptures – exceptional quality of artwork is seen in Elephanta Caves (the 5th – 8th century AD) or, for example, in the unique Yali Mandapam (the 8th century AD) near Mahabalipuram (both in India).

Rock cut architecture is very ancient form of architecture. Some of the oldest rock cut structures were tombs and dwellings.

The unique Hypogeum of Ħal-Saflieni (Malta) was developed in natural caves, gradually extending them. This was done in 3800 – 2500 BC, thus it is a candidate to be the oldest rock cut structure of the world. Most ancient rock-cut tombs in Israel are approximately 5,000 years old, of similar age are rock cut structures in Southern Italy, Sardinia, Sicily. Outstanding monument is Dwarfie Stane in Orkney Islands, United Kingdom, which also is approximately 5,000 years old.

First large scale rock cut architecture was created in Ancient Egypt. One of the oldest might be the mysterious Great Sphinx of Giza which belongs to the most amazing creations of ancient people. Some consider that this giant sculpture might be created even in 2550 BC. In the 13th century BC in Egypt there were created some of the most impressive examples of rock-cut architecture ever – like the rock cut tombs in Valley of Kings and Abu Simbel temples.

Southern Italy and Sicily contain some of the oldest rock cut structures in Europe. Sasso Caveoso (Italy) are rock-cut dwellings which might be even 9,000 years old (another candidate for world’s oldest rock cut architecture). Rock cut tombs near Pantalica (Italy) have been created by ancient people of Sicily around the 13th – 7th century BC.

In India the magnificent tradition of rock-cut temples started around the 3rd century BC when Barabar Caves and Nagarjuni Caves (Bihar state) were built. Some of the most impressive rock cut structures ever were built in India until the 8th century AD. Ajanta Caves and Ellora Caves belong to the highest achievements of architecture and engineering of this period worldwide. In other countries of Southern Asia were created similar rock cut ensembles – beautiful examples are Bamyan Caves (Afganistan) and Dambulla Caves (Sri Lanka).

Another extreme example of rock-cut architecture is the numerous rock-cut temples in China. These ancient Buddhist temples and monasteries are amazing due to their high number, a huge area of wall paintings, and giant sculptures. Thus Longmen Grottoes (the 4th – 10th c. AD) include 2,345 (!) separate grottoes and contain more than 100,000 sculptures. Leshan Giant Buddha (713 – 803 AD) is a 71 m tall sculpture of Buddha.

Unusual rock-cut structures were created by early and medieval Christians. This was in part the secretive character of faith in the times of persecution and in part continuation of a more ancient tradition of stone cut temples as a "direct link to supermundane". These structures have helped to preserve the impressive Christian art.

Many catacombs are very old – in Near East underground passages in cities were built many thousand years ago. But construction of these underground structures flourished in the Late Middle Ages and the beginning of modern times when extensive networks of underground passages and rooms – catacombs were built under many cities of Europe and the Near East. They developed as cheap mines of construction material, tombs, sewage systems, and secret passages. Among the most amazing catacombs should be mentioned Znojmo Catacombs (Czechia), built as defensive system for whole city in the 14th – 15th century, more than 400 km long Catacombs of Paris (France), eerie Catacombs of Palermo (Italy) and early medieval Catacombs of Kom el Shoqafa (Egypt), containing unique art values.

Most rock-cut structures created after the 17th century are infrastructure objects like tunnels, mines, underground laboratories. These are the largest underground structures of the world, serving civil, military, and scientific interests. These structures have little or no value in art and architecture but represent amazing achievements of engineering. Some of the largest rock-cut structures are CERN Large Hadron Collider (Switzerland and France) – exact 27 km long underground ring built for some of the most ambitious scientific experiments, as well as the 137 km long Delaware Aqueduct (United States) and 54 km long Seikan Tunnel (Japan).

Some types of rock cut architecture

Exceptional type of rock cut architecture is rock cut monolithic structures. These free-standing structures are cut out of live rock and require very high skills from their creators. Venerable examples are Kailasanatha Temple in Ellora Caves and Pancha Rathas in Mahabalipuram (both in India), as well as Lalibela Churches in Ethiopia.

Articles about the rock-cut architecture and sculptures

The largest monolithic statue in the world, most likely built around 2550 BC. 73.5 m long and up to 20.22 m high, one of the most iconic sculptures in the world, the central object of numerous legends and stories. In total in the Valley of Kings are known 63 tombs and chambers. KV5 is the largest rock-cut tomb in the vast necropolis of ancient Egyptian noble families. Belonged to sons of Ramesses II. In KV5 thus far have been discovered 121 rooms or chambers and it is expected that more will be discovered, this complex was made in the 13th – 12th century BC. KV17 – the tomb of Pharaoh Seti I – is one of the best-decorated tombs and the longest in the valley, 137 m long.

11 monolithic Christian churches hewn underground from the cliff in the 13th century.

A complex of mortuary temples, built around 2100 – 1300 BC. Includes partly rock-cut, partly built, enormous structures. Especially impressive and beautiful is the Hatshepsut’s Temple (sometimes around 1450 BC), one of the great achievements in the history of architecture.

Unique troglodyte village with numerous underground rock-cut houses in intense use up to this day. Matmâta was developed as a hideaway from the scorching heat of the Sahara desert and it is possible that it has existed since Roman times. Remnants of a statue of an enthroned pharaoh, 19 m high and weighing more than 1000 tons. Here is the largest ancient stone monolith that has been transported. This has been done for 275 km in the 13th century BC. This group of rock-cut chambers consists of 492 Buddhist cells and temples. Built for approximately 1000 years since 366 AD. Contain many art values but is especially valued due to the enormous amount of murals, covering 42 thousand m².

A unique complex of 5 cave temples and monasteries, worship has been practiced here since the 1 century BC, inhabited since prehistoric times. These partially rock-cut caves are adorned with numerous frescoes and statues. One of the most impressive monuments of rock-cut architecture in the world – two cliifs with a rock-cut complex of Buddhist cells and shrines. 2,345 rock cut chambers, more than 100,000 statues made in 316 – 907 AD. A historical underground city that could sustain up to 20 thousand people. Tunnels with premises extend up to 60 m deep. The city can be closed with an enormous stone disc. Development of city started in the 8th – 7th centuries BC, it often served for refugees. In total in this area are some 200 such underground cities. Ancient Lihyan and Nabatean city with 131 monumental rock-cut structures, mostly tombs. The city developed around the 6th century BC, flourished in the 1st – 2nd century AD. It is possible that this is a more important center of civilizations than considered thus far. Giant, 71 m tall rock-cut statue of seated Buddha, made in 713 – 803 AD. It was made to pacify the roaring river that took the lives of many people. After the construction of the statue river really became quieter – possibly due to debris loaded in the river. Oldest rock-cut cave temples in India, hewn mostly in the 3rd century BC. Caves are made in granite, with polished walls. Some of the oldest operating salt mines in the world operating since the 13th century AD. Up to 327 m deep, more than 300 km long. Miners have carved chandelier, cathedral, reliefs.

Group of prehistoric rock-cut dwellings. One of the oldest settlements in Italy, used for 9,000 years up to this day. Unusual planning: here streets often go above the roofs of other cave houses, the ancient city contains a maze of underground passages and rooms.

Unique sculptural group – portraits of four presidents of the United States, each 18 meters tall. Sculpted in live rock in 1927 – 1941. 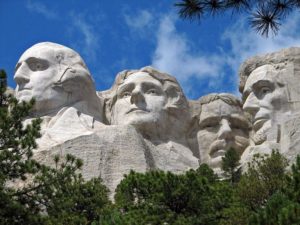 The ceremonial center of Mojocoya and Inca people, located on the top of the mountain. Includes the largest known sculpted rock in the world – a 250 m long, 60 m wide, horizontal area covered with carvings in sandstone. Constructed in the 3rd – 16th centuries. The present book entitled “Rock Cut Temples of Western India” is an exhaustive book that covers all the caves of Western India. The book is the need of the times as a more researched book, a more detailed book on Western Caves has not been published after James Burgess and James Fergusson. Modern viewpoints and a deeper understanding of the caves were essential.

Underground Structures of the Cold War

Books on the history of fortifications are plentiful, but the hidden forts of the nuclear age have not been cataloged and studied in the same way until now. In Underground Structures of the Cold War, the author describes when and where these bunkers were built, and records what has become of them.