It is not that easy to find representative information about the most interesting landmarks and attractions in North Korea.

Devastating wars have not erased fully the unique heritage of Ancient and Medieval Korea, nature in North Korea is gorgeous and Koreans are deservedly proud of their heritage. But a major part of the country is not open to foreign tourists, not described in tourist booklets or even scientific works. Due to this, the list below could miss many outstanding landmarks.

The most amazing (known) wonders of North Korea are:

Most tourists bring from North Korea images of macabre structures built to serve as tools of propaganda for the current regime. Well… there might be needed a time distance to appreciate this kind of heritage – when this will be a part of a rather distant past.

Map with the described wonders of North Korea

According to legends and modern stories in this beautiful crater lake lives a monster. Purported tomb of Dangun – the founder of the first Korean kingdom. The enormous complex includes the 22 m high and 50 m wide burial pyramid, which was built at least 5 000 years ago. Complex includes numerous sculptures.

Enormous castle – fortress with some 10 km of stone walls, built several millenia ago. Major part of walls has collapsed and is in ruins.

Mausoleum of Goguryeo from 357 AD, with valuable inscriptions and fine murals. 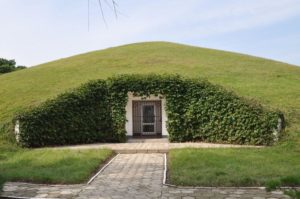 Ruins of an impressive fortress, developed in the time period from the early 5th century AD to 1675. Walls are 10 – 11 m high, 6 – 8 m wide and have a circumference of 6.6 km. Most of the walls are built on the mountain ridges.

The only large Buddhist temple in this part of the country that survived the Korean War. Founded in the 7th century, contains many values of art and architecture. This higher education institution was established in 1089. It has more than 20 buildings, two more than 500 years old ginkgo trees and more than 900 years old zelkova tree.

Korean Buddhist temple, founded in 898 AD, contains some of the oldest wooden buildings in the country, e.g. Ungjin Hall that was constructed in 1327. A large shrine that was constructed in 1325. A fine example of elaborate Korean architecture of these times.

Magnificent Buddhist temple that was founded in the 9th century. Most of its buildings were rebuilt in the 15th century. A well-preserved royal burial from the 10th century. Contains guardian statues and murals, including a mural on ceiling showing stars.

This Buddhist temple was founded in 826, it is a repository of many Buddhist art items. Contains six buildings that were built mainly in the late medieval times.

A mausoleum – two separate burial mounds of the second king of Joseon dynasty, built in 1412 – 1419. Adorned with granite carvings, statues of twelve zodiac animals and other statues.

An important Korean Buddhist temple, founded by Chontae Buddhist sect in 1027. Restored in 2005, consists of 26 buildings.

The only intact Korean Buddhist temple in Kaesong city. Constructed in 930, contains many valuables.

Royal burial mound from the 13th century. Although it is in a poor condition, valuable murals of stars and 158 dogs have been preserved.

Mountain fort with 8 km long walls. It was built approximately 1000 years ago and its walls are 6 – 7 m tall.

My Holiday in North Korea: The Funniest/Worst Place on Earth

Most people want out of North Korea. Wendy Simmons wanted in.

In My Holiday in North Korea: The Funniest/Worst Place on Earth, Wendy shares a glimpse of North Korea as it’s never been seen before. Even though it’s the scariest place on Earth, somehow Wendy forgot to check her sense of humor at the border.

A new edition of the first travel guide to cover the practical aspects of traveling to and around North Korea — a country that both intrigues and concerns the international community. Everything a genuine traveler needs is here, including red tape and security issues, access from South Korea and Beijing, routes outwards from Pyongyang, and opportunities for excursions into the unspoiled countryside. Altogether a fascinating insight into the culture and history of a country that currently exists in virtual isolation from the rest of the world.

this info is really good, keep it up.

Many thanks for good words!