This category includes the largest and most unique trees in the world.

Trees for most part are perennial woody plants who have one main trunk and considerable size. There is no minimum size for a tree agreed and imagination is applied to some degree when distinguishing between shrubs and trees.

In 10 of the existing plant divisions six include trees.

Total number of tree species in the world still is a wild guess – maybe 10,000 and maybe 100,000 but most likely somewhere in between. Every month there are reported new tree species from the whole world, including Western Europe.

The largest trees belong to a comparatively small division – conifers (Pinophyta). Approximately half of the large and outstanding trees listed here are conifers. Conifers are the highest, largest, and oldest trees in the world, conifer is also the second stoutest tree in the world.

Next group of exceptionally large trees belongs to flower plants – these are eucalypts (Eucalyptus) belonging to myrtle family (Myrtaceae). Out of more than 700 species in this genus five exceed the height of 85 meters, five exceed trunk volume of 200 m&sup3, and eight exceed girth of 14 meters.

The stoutest tree of the world most likely is balete tree (Ficus balete Merr. or Ficus benjamina).

It seems that there is not a very high probability that some other species of trees can take over the record for volume, height, or stoutness. But further investigations can change the list of the ten largest trees in each category significantly.

Nowadays there are two regions in the world with pronounced tree gigantism – coastal California, Washington and Oregon (United States) and Tasmania (Australia).

Out of ten records regarding the trunk volume, height, and stoutness in California, Washington, and Oregon there are registered 9 records and in Tasmania – 8. This can be explained by the fact that both these regions of the world really have giant trees and these magnificent monuments of nature have raised a large interest. Many enthusiasts have searched champion trees in these regions and performed exact measurements to prove their findings.

Other champion trees are located in diverse regions of the world – Madagascar, South Africa, Mexico, and so forth.

Author recognizes that lists here are far from being complete and here might be missing numerous great trees already well known in their respective localities.

Some notes on measurements and records

I am glad to announce that trees increasingly rare are "measured" by their imaginary age. It was not that long ago that tourist booklets announced that some tree is that and that many thousand years old and local people were virtually ready to fight to prove that their oak or cypress is exactly that old. Scientific justification? None! Just hundreds of tourist booklets and even some people with scientific degrees repeating this mysterious figure once and again.

Happily more and more people realize that the size of the tree tells little about its age. Nowadays naming such imaginary age of the tree is rather a sign of provinciality.

In practice the age of the tree can be determined just in some cases, when the tree rings are well visible and the core of the tree is not hollowed, or when the date of tree planting is known with confidence.

Nowadays more and more attention is turned to measurable values – the volume of the trunk, height, diameter, girth (also going out of trend), crown projection.

Very often the girth is mingled with the diameter in favor of "increasing" the tree. Very often the tree is measured at soil level – of course, thus getting a pretty impressive number. In such cases the height of measurement is not mentioned – thus, if you hear about English oak with 25 meters girth without further explanations – most likely it is measured at soil level and has a girth of some 9 – 10 meters at 1.3 meter height.

Measurement should be made at the narrowest place between the soil and 1.3 – 1.4 meters height, athwart to the tree stem. If the tree stands on a slope – measurement is made uphill.

Large trees often have large buttresses and then a girth includes lots of empty air, not the tree. Due to this more correct figure is the average diameter of the tree. Of course, it takes some effort to calculate it.

Height of the trees is hard to measure. For the most part, it is done by climbing the tree and measuring it. Being at the shaky summit of a giant tree at the height of a 20-floor building is not for everyone – in fact, very few in the world do this. Often the last meters of the summit are not measured – it is too risky – and are not included in the height of the tree.

Another approach is using modern remote sensing technologies, such as LIDAR. Thus, for example, the second tallest known species of trees in the world – mountain ash or swamp gum named Centurion in Tasmania – was found and measured. This tree is 99.67 meters high – the fourth-highest tree species in the world.

We can be sure that there are numerous very high trees in the world waiting to be discovered. Very tall trees grow in ravines and deep valleys, well protected from winds. Thus several tree enthusiasts from Alaska Pacific University found 8 species of trees exceeding 80 meters height in an area of 2 km³ in Sabah, Malaysia in January – February 2007.

Volume seems to be the best value to measure the size of a tree. But it is pretty hard to calculate and there is a lot of ways to do it wrong. The volume of the main trunk is measured and compared most often.

To do this there is determined diameter of the tree at different heights, height of the tree and then calculated the volume. Roots and branches are not included, hollows are included.

This is fairly easy to do for many conifers who have one top. Measuring the volume for many other trees which have complex canopy might be too hard.

Other articles about trees

Top 25 trees of the world 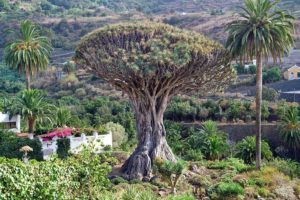 A group of 7 enormous baobab trees forming a group – a rare occasion. Trees got their name due to the fact that painter Thomas Baines painted them in 1862. One of the trees with the largest canopy in the world. This Ficus benghalensis is considered to be some 200 – 250 years old, the area of the canopy – 1.5 hectares, circumference of the canopy – 1 kilometer. Height up to 25 meters, contains some 2,880 aerial roots rooted in soil. Possibly the largest balete (Ficus balete) tree in Asia. Height of the tree up to 60 – 65 m. The girth of the trunk might exceed 30 m – it is told that 60 adult men are needed to get their arms around the tree, although it is hard to measure the tree due to countless roots around it.

Here grow possibly the world’s oldest tea trees that are up to 3,000 years old. In total in this forest grow more than 85,000 old tea trees. This could be one of the oldest tea plantations in the world. The tallest known tree in the tropics and the tallest flowering plant in the world, a 100.8 m tall Shorea faguetiana.

World’s largest known single tree by the area of its crown. Canopy of this banyan (Ficus benghalensis L.) covers 19,107 m². The oldest known human planted tree (Ficus religiosa), planted in 288 BC from a sapling of Bodhi tree where Buddha became enlightened. The girth of the tree changed due to additional trunks grown together with the original one. This tree is considered to be devilish because it resembles a giant swamp creature. Many believe that the tree is enchanted and supernatural beings live in it. The tree has a very large girth and locals love to tell that it is 4,000 years old. A powerful spring starts below the tree.

The highest known mountain ash and eucalypt (Eucalyptus regnans F.Muell.) in the world, making this the second tallest tree species in the world. Height 99.8 m, diameter 4.05 m (girth 13.7 m), volume 268 m3. Has been at least 103 m tall but the top is broken. The tree has suffered during the fires in January 2019 but is alive. Many historical villages of Tanna island have giant banyan trees that are located in the center of local culture – dancing place (nasara). The diameter of such trees reportedly reaches 50 m. The tree in Lomteuheakal has an approximate trunk circumference of 26 m. Banyan of Yakel village has a house built on top – this house is used for the circumcision of local boys. Kaluas is considered by locals to be the largest banyan tree in the world. The tree is huge but, unfortunately, no data about its size was found. Giant sequoia (Sequoiadendron giganteum (Lindl.)), the second largest tree in the world. Height 81.5 m, girth at breast height 27.8 m, volume 1,320 m3. This beautiful tree is declared as a National Shrine, a memorial to those who died in the war. Enormous Southern live oak (Quercus virginiana) of unusual beauty. The circumference of the trunk is 8.5 m but especially impressive is the enormous crown that covers 1,600 square meters. Stories about ghosts – angels around the tree. Portrays the anatomy and growth of the redwood, describes the plants and animals that share its habitat, and looks at the history of redwood logging.

The publication of Remarkable Trees of the World took American audiences by storm. Thomas Pakenham embarks on a five-year odyssey to most of the temperate and tropical regions of the world to photograph sixty trees of remarkable personality and presence: Dwarfs, Giants, Monuments, and Aliens; the lovingly tended midgets of Japan; the enormous strangler from India; and the 4,700-year “Old Methuselahs.”