Here are listed locations with geysers, extinct (or may be – dormant?) geysers, perpetual spouters and cold water geysers of Africa. Locations are listed in alphabetic order.

Surprisingly little known is the beautiful geothermal area south from Tendaho and Dubti.

This area is named "Allalobad" – "the waters of Allah", but often is named after the nearby villages.

One of the hot water pools here acts as a nearly constant geyser – Allallobeda Spouter, which often is 6 m tall but in rare cases – even 30 m tall. Surface of the water in this pool is 97°C hot.

There is one more geyser in another spring – it is just 0.3 m tall. Some more springs are pulsating, sometimes boiling more intensely.

These springs have developed at the end of pipelines of abandoned mines and over the years have formed interesting travertine mounds. 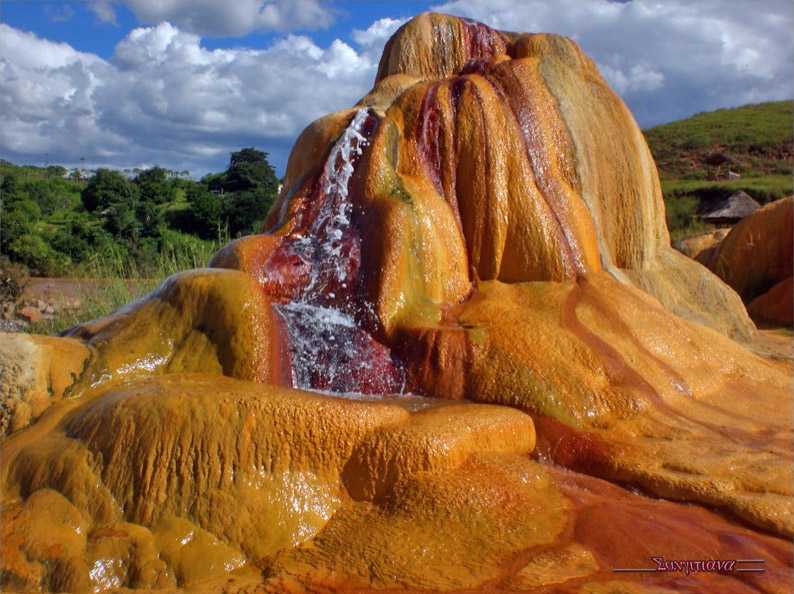 Some of the most amazing hot springs in East Africa are Buranga Hot Springs. Currently here are flowing 37 springs which receive the geothermal heat from the deep faults of East African Rift System. One of the springs – Mumbuga spring – is a perpetual spouter – a permanent small fountain. Chemurkeu springs are located to the south of the most famous Lake Bogoria geysers – Loburu Geysers.

Springs are located close to the lake, some springs are even inside the lake. In total here are 40 hot springs, 4 geysers among them. One geyser is up to 1.2 m high, one is less than 0.3 m high. Geysers have formed carbonate terraces.

One of the most unusual places on Earth is Dallol Volcano. It is dubbed to be the most colorful place on Earth and the hottest place in the world. This is the only volcano in the world below the sea level and without water over it. This place has got the only geysers of salt and acid in the world – and lots of them! There are numerous hot springs around Lake Abaya. Chokore Hot Springs (Chakoware Hot Springs) north from the lake recently had even some geysers.

Geysers were active here up to 1979 – the last geyser was erupting erratically, up to 1.8 m high.

In the northern part of Langano Lake is a deep, round bay with an island in the center. This island has different names – Edo Laki, O’a, and also Geyser Island. For several decades here was located impressive geyser, which now has disappeared.

The best place to see geysers in Africa is Lake Bogoria. In several locations around this lake at one time can be seen more than 10 geysers, but the best known here are Loburu Geysers.

Here are found more than 50 hot springs, at least 3 perpetual spouters and six geysers, where one reaches up to 5 m high. As the Suguta River is passing through the Gap (a place, where the flat Suguta valley is flanked by two volcanoes), the river is supplemented by numerous hot springs flowing from both sides of the valley. One of these springs – Logipi Geyser – up to the recent times was an active geyser.

Losaramat geothermal area is one of four areas with geysers around Lake Bogoria. Here are 17 hot springs with 3 geysers among them. Each of the geysers is some 0.7 m high.

In 2004 there was observed geyser activity on the North Island of Lake Turkana. It is a deserted summit of a dormant volcano, crossed by a fault line. In the southern part of the island are observed hot springs and steam vents, fumaroles, and solfataras.

The most interesting geothermal features of Sahara are seen in Soborom geothermal field. Here are located steam jets, boiling mud pots and solfataras.

The hottest spring pool is named Yerike – gas constantly is rising from it and the pool is bubbling as if boiling.

The temperature of springs in Soborom is between 22 and 88°C. Here is emanating also sulfur and iron, both have colored the soil in vivid colors.

The largest island in Lake Baringo is Ol Kokwe – a summit of extinct volcano.

In 1902 here (above the lake level) existed springs which on a regular basis erupted – geysers. Over the last decades geysers have not been observed here anymore, here are located boiling springs.

Wondermondo has made a summary of information about some of the least known geysers in the world – geysers of Africa.

True geysers exist in two African countries – Ethiopia and Kenya. In the past, they (possibly) existed in Chad. In Uganda is known interesting perpetual spouter, but in Madagascar – a beautiful cold-water geyser. There are unclear reports about geysers or cold water geysers in Zimbabwe and Zambia in the recent past.

Currently there are two active geyser fields in Ethiopia – Allalobed geysers and Dallol salt springs and geysers. Both are located in the Afar region. Dallol salt springs and geysers certainly belong to the most surprising geothermal features in the world – here exists a whole wonderworld of colorful salt terraces. Allalobed Geyser seems to be the most powerful in Africa – in rare cases, it has been erupting up to 30 m high.

In the past there were known more geysers along the East Africa Rift zone – but these are extinct now. It is still possible that there exist geysers not mentioned here.

Kenya has the best geyser fields of Africa in four locations around Lake Bogoria. At one time there might be erupting 10 geysers, but several more are dormant and can start acting as the lake changes its water level.

In the past there were more geysers in Kenya – now they are extinct or dormant. It is well possible that here exist some more active geyser fields, not mentioned in this page.

Reports about geyser in Tibesti Mountains, Chad are not convincing and nowadays here are up to 88°C hot, fervently boiling springs.

One of Buranga hot springs (Uganda) is perpetual spouter – "almost geyser". This amazing spring has formed a cone of travertine with fountain on the top of it.

Are here listed all geysers of Africa?

In literature there have been mentioned some more geysers of Africa… which for the most part are not geysers:

In earlier literature there could be found a reference to spouting springs near Lake Hannington in Kenya (10). Well, many Eastern African lakes earlier were called in names given by Europeans, now we use local names. These are the same four groups of excellent geysers around Lage Bogoria, such as Loburu Geysers.

Geysers. What makes them work? Many who have seen a geyser in action know only that it spouts hot water into the air. Many others have never seen one. Chapter 1, Geysers of the World, delineates their distinguishing features, locates the geyser regions of the world, and places investigations by world travelers and scientists in a historic perspective.

Geysers: What they are and How They Work

In Geysers: What They Are and How They Work, T. Scott Bryan explains the geological setting that produces the pressure, heat, and abundant water necessary for a geyser to form and introduces readers to the variables that shape each geyser’s distinct personality. Some geysers spout just inches above a pool of water and others blast hundreds of feet in the air from conical vents.