Described blowholes and other wave phenomena

The blowhole is an intermittent natural water fountain that is powered by wave energy. Visually it is quite similar to a geyser and often blowholes are just called – sea geysers. But the mechanism of blowholes is absolutely different. Geysers are created by the thermodynamical factors (overheated water under less hot water in a narrow passage), but the fountains of blowholes are created by physical movements of the water – waves.

The term “blowhole” often is applied to several more exciting natural landmarks, such as the entrances in large caves where the air blows in or out. There exist also methane blowholes – craters that have been created by methane exhausts from the ground. This is an interesting and at the same time worrying phenomenon in the far northern lands: due to global warming there is thawing permafrost and in the atmosphere is released a huge amount of methane – powerful greenhouse gas. Sometimes giant bubbles of this gas create enormous craters.

Wondermondo though includes on this page only the blowholes – water fountains. Here are included also other places where waves create interesting phenomena.

How do blowholes form?

The recipe for a proper blowhole – sea geyser – is as follows:

How high are the fountains of blowholes?

Nobody has measured, and, most likely, nobody has ever seen the world’s tallest fountains of blowholes: because nobody is there at the right time. It is well possible that the most powerful blowholes are found in remote areas and are active only during the most powerful storms. But we can be sure that the tallest fountains of blowholes are much taller than the world’s tallest waves and taller than any geyser of the world.

The height of the known blowhole fountains in most cases also is just… a guess. At least to some extent. We can compare the fountain with the height of nearby trees, cliffs, other objects and say a rough number, e.g. – 30 meters. In reality, these could be 26 meters or maybe 40 meters. Who knows?

The tallest announced blowholes which are known to Wondermondo are:

How common are blowholes?

Most of the announced blowholes are located in touristy areas: Hawaii, Caribbean islands, Mexican coasts, and coasts of Australia. Other well-known blowholes are in areas with many nature and travel enthusiasts: Europe, Canada, the USA, and – also Australia.

At the same time, this natural phenomenon is not very common. A proper blowhole requires a coincidence of several specific factors. Most likely there are several hundreds of locations on Earth with proper blowholes. Thus, if you happen to see one, even the most visited one (e.g. Kiama Blowhole or Nakalele Blowhole) – you are privileged to see a rare natural spectacle! Enjoy it!

Top 25 blowholes and other wave phenomena

Amazing, unusual vortex – blowhole. It has formed in prismatic basalt. Here near the sea coast has formed a constantly changing basin. As the waves come, it rises, flooding over the rims. As the waves recede, it empties and water again falls in it. Near it are smaller blowholes that resemble geysers. One of the most popular blowholes – a location where sea waves through the passage in the cliffs create water spray that is up to 25 meters (reportedly even 60 m) high. One of the highest blowholes in the world.

Unusual seaside cliffs from numerous thin layers of Oligocene limestone. As a result, there have formed diverse cliff formations that at some places resemble heaps of pancakes. The jagged cliffs have smaller natural arches and several roaring blowholes. These blowholes are especially impressive at high tide and strong southwestern winds. Enormous sea cave, 290 m long. It can be accessed only from the sea. Over the entrance falls a waterfall – thus every visitor gets a shower from it. During the winter, as the power of the waves increases, the entrance into the cave turns into a blowhole – the pressure of the air from the cave pushed back the waves, creating a fountain of mist and water. A break in the reef, where are formed especially large, glassy blue, smooth waves. These are some of the heaviest waves in the world – a huge water mass is broken and may fall on the head of an unwary surfer. Waves are beloved by surfers but are very dangerous. A hissing and roaring blowhole that creates up to 15 and even 30 m high jets of water. Nearby was a larger blowhole but it was blown up because the saltwater spray from it damaged the nearby cane fields.

Some of the most powerful blowholes in the world, water fountains rise up to 30 m high. These blowholes exist thanks to a system of lava tubes that reach the ocean here. Local tourist guides put the coconuts in the holes and they are blasted high in the air. Impressive blowhole in the lava fields of Maui. The approximately 30 m tall fountain beats from a shallow pool close to the sea. 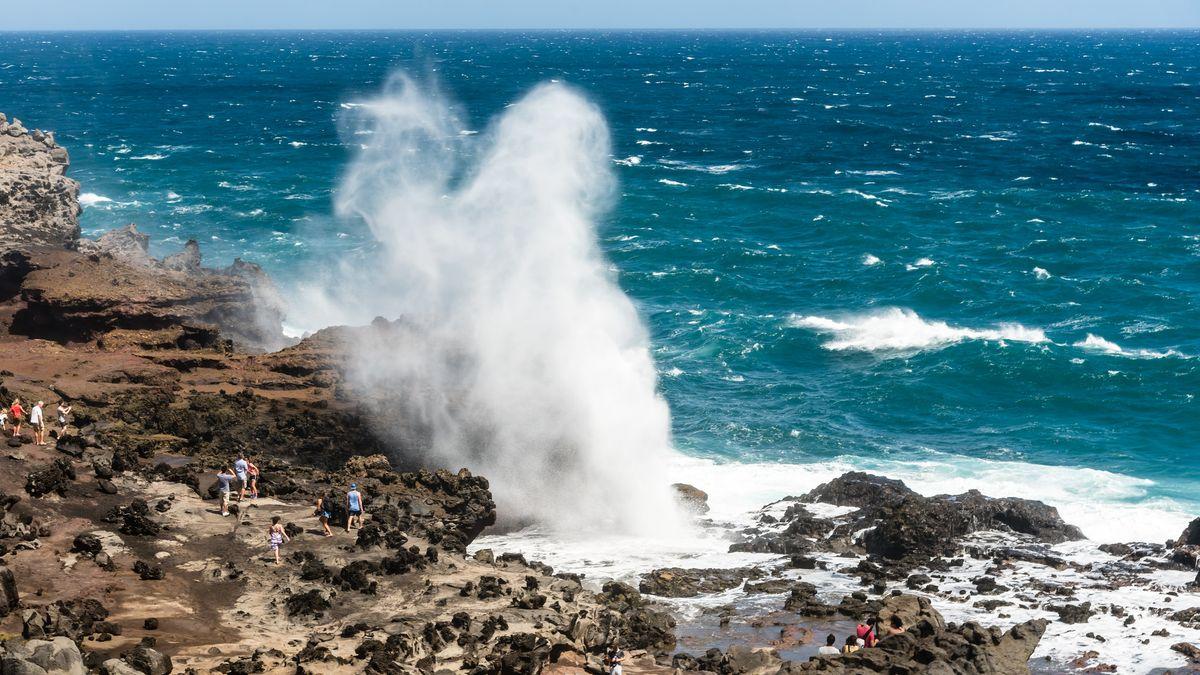 Impressive blowhole at the base of some 40 m high seaside cliffs. At high swells, it creates a deafening noise and shoots up to 60 m high. Then it can be seen from some 20 km distance. Usually, it is around 10 m high.

Sea caves with blowholes. As the wave enters the cave, air pressure forces a slanted fountain of mist and water.

Group of spectacular, up to 18 m high blowholes at the sea. Here the wave action has created travertine terraces and pools with numerous blowholes. Fascinating and unusual landscape.

Beautiful blowhole amidst several natural pools with emerald-colored water. Wave action has formed also limestone terraces. During rough weather, the blowhole could get up to 60 m high! A sinkhole – collapse in the roof of a sea cave in the spectacular Loch Ard. It is possible that for a while there existed a blowhole with a fountain but currently, this is a sinkhole with raging sea-water seen in it. This blowhole is loud.

Unusually powerful blowholes. Here the coastal cliffs (Zuytdorp Cliffs) are more than 100 m high and the wave energy has pierced the rocks, creating several blowholes. If the conditions are right, the splashes are forced up the cliffs and reach the daylight, rising up to 20 m high. There are several more blowholes in this area.

Impressive, picturesque blowhole that creates a slanted fountain. During the storms, it can get up to 20 m high and might be even dangerous because it hits unexpectedly and with huge power. Blowhole has formed in granite rocks.

Here are forming giant waves due to the fact that here starts Nazaré Canyon – a giant undersea canyon that is up to 5 km deep. Waves are up to 30 m tall. Group of blowholes, the tallest create up to 40 m tall fountains. A very impressive natural monument that resembles some of the most powerful geysers.

Group of sinkholes – blowholes. Some of Europe’s most impressive blowholes with up to 40 m high fountains (if counted from the sea level). Blaster Hole on the Horse of Copinsay

Sea jet and also blowhole that has formed in this small island – sea stack. At strong winds from the east, the water jets can be up to 60 m high. Hole in the rocks at the sea that looks as if the ocean is drained in it. This is some 6-7 m wide hole, also 6-7 m deep. It is at its most impressive approximately one hour before the high tide. At high waves, it creates some meters high splashes. An impressive cave – tunnel, which starts on the land and ends in the sea. Waves enter the cave, creating a very impressive sight and sound. The grotto is some 20 – 25 m wide and 20 – 30 m deep.

Large window – opening down to the sea, located at the northern shore of the island. This is a former blowhole that now for most of the time is too large to create spectacular fountains. During stronger winds and the right direction of the wind, there still are observed nice spouts from Watamula Hole. There are though smaller blowholes to the north-east from Watamula hole and further, around the famous “bokas” of Curaçao (e.g. Boka Kalki), with the limestone terraces that are characteristic for many active blowholes.

Breverton’s Nautical Curiosities: A Book Of The Sea

Breverton’s Nautical Curiosities is about ships, people, and the sea. However, unlike many other nautical compendiums, the focus of this book is on the unusual, the overlooked, or the downright extraordinary. Thus, someone most of us do not know, Admiral William Brown, is given equal coverage to Admiral Nelson.

Discover Earth’s most beautiful and fascinating natural landmarks. From the spectacular granite domes of Yosemite to the reefs of the Bahama Banks and the ice sheets of the Antarctic, this is an unparalleled survey of the world’s natural treasures.